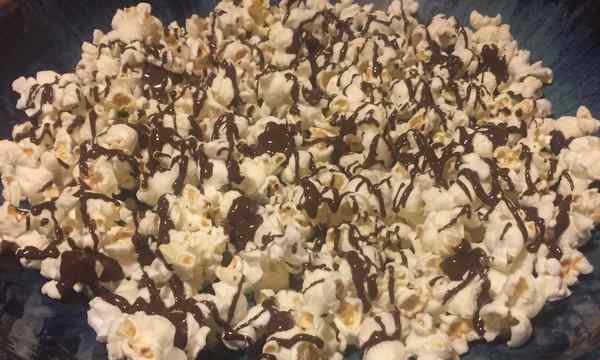 This elegant, mildly sweet and salty snack is so easy to make and planet-friendly.  There are just four ingredients: popcorn, dark chocolate, natural peanut butter, and a touch of salt.  It’s vegan and gluten free, and if you use Fair Trade chocolate, much better for the environment and cacao farmers than conventional chocolate. 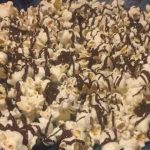 Conventional chocolate production is problematic with respect to human rights and the environment.  A large fraction (some estimate as much as 40%) of cacao is grown using slave labor, and child slaves are not uncommon.  Even if farmers are paid, they are typically impoverished, not seeing their fair share of the large amount of money that is spent on chocolate ($13 billion in the US each year).

Cacao is often grown on clear-cut rainforest.  In fact, hundreds of thousands of acres of rainforest have been cleared to produce chocolate.  Conversion of all of this land releases carbon to the atmosphere, contributing to climate change.  Also, rainforests are hotspots for biodiversity, the loss of which is one of the biggest environmental challenges needing our attention.  (See the Science page to learn more about the Planetary Boundaries concept, which tells us which environmental processes are being tweaked beyond sustainable levels by our activities.)  However, it can be grown sustainably!  Shade-grown chocolate means it is grown under the canopy of the rainforest, thus preserving the forest for both habitat and carbon storage.

By buying Fair Trade, you are supporting production processes that meet environmental and social justice standards.  These standards include fair wages, avoidance of certain pesticides, buffer zones around ecologically sensitive areas, minimal water use, and sustainable disposal of organic waste.  Importantly, Fair Trade generally bans the use of virgin land, which has a big impact on the carbon footprint.

Recanati et al. (2018) quantified environmental impact (including nutrient pollution, global warming potential, and ozone depletion) of four different dark chocolate supply chains which differed in amount of fertilization and irrigation water used, for example.  Not considering deforestation impacts, these authors found an average carbon footprint of 2.62 g CO2(eq) per g of chocolate, with the best scenario reducing the greenhouse gas production by about 30% relative to the worst.  Perez Neira (2016) found a similar estimate of dark chocolate carbon footprint, and also found that irrigation and fertilizer were the largest factors in the carbon footprint.  So, a 49 g bar (approximately 2 oz. would have a footprint of 128 g CO2(eq).  However, it is important to remember that these estimates don’t consider the loss of carbon storage that comes with deforestation.  The World Resources Institute states that the total carbon footprint can be two to three times higher if virgin land is used.  So, buying  sustainably produced, shade-grown cacao can lead to a large reduction in footprint, in addition to the other environmental benefits (reduced water pollution and preservation of habitat).

Chocolate does travel long distances to reach the United States.  However, it doesn’t need to be refrigerated for transport, and cargo ships use about 18 times less fuel per ton per km compared to a medium size truck (Gleick and Cooley, 2009).  Perez Neira (2016) estimates about 15% of the total greenhouse gas emissions for chocolate produced in Ecuador and eventually sold internationally is attributed to transport.

Many of us love chocolate, and we use it to express our love for others.  We can spread that love to the planet and to the people growing our chocolate by supporting companies with ethical labor and environmental practices.

Apple Crisp for the Planet