Climate change is a massive challenge facing humanity–16 of the 17 most recent years have been the hottest on record. Sea levels have risen, and intense storm have become more frequent.  The extent of future climate instability depends on steps we take today.

Why should we care about what we eat?

Globally, food systems–what we eat, where and how we grow and process it– play a major role in determining our impact on the environment.  By considering our food choices, we can find “low hanging fruit” for reducing our carbon footprint.

But is it reasonable to think about shifts in diet for environmental reasons?

Yes!  First of all, diets are constantly shifting anyway. Over the last 50 years, in the United States we’ve seen a substantial increase in consumption of processed foods, fast food, sugar, and meat.  In fact, in countries across the globe, increases in demand for red meat and sugar has gone hand in with higher incomes.

It is generally acknowledged that these shifts have resulted in increased incidence of cardiovascular disease, type II diabetes, and some cancers.

It is also true that these shifts have resulted in a more resource-intensive global food system.  In fact, many researchers believe it will be almost impossible to meet the Paris climate targets if diet trajectories stay as they are.

Because healthier diets are generally more environmentally friendly, we get multiple benefits from some simple changes.

What are some general rules to follow for a planet-friendly diet?

Are some meats worse than others for the planet?

Yes.  Ruminant animals (cows, sheep, and goats) release methane, a very potent greenhouse gas, as part of their natural metabolism (whether raised on a pasture or feedlot).

Why do beans have such a low carbon footprint?

Well, first of all, eating plants directly is really efficient!  Think of all the energy saved by not having to grow more plants, on more land, with more resources, just to transport to animals as feed!  Also, beans are able to get their nitrogen from the atmosphere, due to the activity of microbes that live symbiotically with them.  Beans can deliver the protein people may otherwise get from meat, so shifting even some portion of meat in the diet to beans can have an enormous positive impact!

About the People at Meals for the Planet

Jenny is a professor in Civil and Environmental Engineering at UCLA.  Her research has to do with the fate and transport of pollution in the environment.  Lately her lab has been investigating antibiotic resistance genes in air, water, and soil.

She has been vegan for 27 years, and thinks of a plant-based diet as a opportunity to make decisions in accordance with her values several times a day.  Jenny feels strongly that our food choices matter a lot–to our health, to animals, and to a sustainable environment.  Through her research and teaching at UCLA, she has been calculating the carbon footprint and land use requirements of various dietary patterns.  She has applied these calculations to each recipe presented here, so you can see exactly how the meals stack up, ingredient by ingredient, with respect to greenhouse gas emissions next to comparable meals with less resource-efficient ingredients.

Also, as a busy mom,  she relies on meals that are very quick to put together, can be customized for picky eaters, and pack up well in thermoses for lunch the next day.

Jennifer Jay earned her B.S., M.S., and Ph.D. in Civil and Environmental Engineering at Massachusetts Institute of Technology.  For the last fifteen years, she has been a Professor in the Civil and Environmental Engineering Department at the University of California Los Angeles.  She specializes in the fate and transport of chemical and microbial contaminants in the environment.  Her research addresses a wide range of topics  including coastal water quality, arsenic in groundwater, and environmental proliferation of antibiotic resistance. She teaches classes in Aquatic Chemistry, Statistics, Chemical Fate and Transport, and Food: A Lens for Environment and Sustainability.  She was awarded the Presidential Early Career Award in Science and Engineering, and an engineering school-wide award for excellence in teaching.  In addition, she was the Pritzker Fellow for Environmental Sustainability and a Carnegie Fellow for Civic Engagement in Higher Education.  Jennifer also directs the Center for Environmental Research and Community Engagement (CERCE), a UCLA Center that addresses community-based environmental research questions in under-served communities in Los Angeles.

Joshua is a full time philanthropist & plant-powered health advocate from Spokane, WA. He has been a vegetarian since 1994 and a vegan since 2013. He spends most of his life working towards building a better world by supporting compassionate businesses and non-profits with IT, business, and web support. He created the organization called Loving Co-Op and the mission is to do exactly that. On top of supporting other organizations, he has built a regional vegan non-profit named INVeg and created Spokane VegFest which is an annual celebration of all the amazing ways plant-based living supports a healthier world. 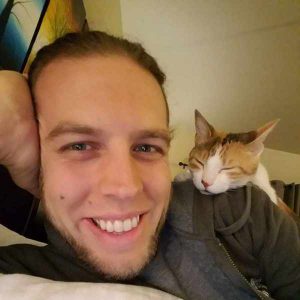 He has a strong passion for technology and loves to share his skills. At the end of 2017, he was supporting over 70 organizations around the world. He teaches his clients how to build websites, business plans, restructure their organizations, social media marketing strategies, and anything a small startup, large corporation or non-profit needs to become successful.

Josh went veggie at a young age after making the connection between living beings and the “food” sold at the supermarket. One day in the summer of 1994 he was at Burger King having the normal whopper with his mom and he told her he would never have another one, and he never did It took about 20 years to realize that milk and eggs were just as bad to the planet as meat. Going fully plant based was one of the best decisions of his life and he just wished he took the blinders off earlier. 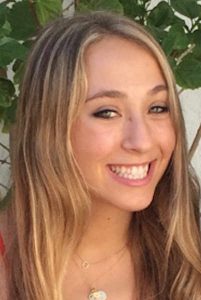 Polly is a senior at UCLA majoring in Biology.  She has been vegetarian or vegan since the age of eight and convinced her entire family to give up meat.  Polly is passionate about animal rights and the environmental impact of food choices.  She worked with Professor Jenny Jay and other students on the Blended Burger project for the NRDC.  They tracked the carbon footprint of various beef burgers and compared this to vegetarian burgers and blended (70% beef and 30% mushroom) burgers.  More recently Polly has been working with Professor Jay on tracking the carbon footprint of various foods and activities and how reductions in these things can play into the Personal Paris Pledge.” 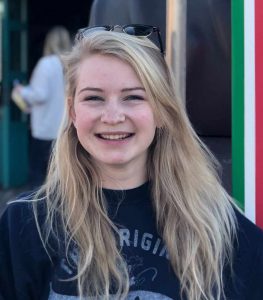 Katie is a sophomore at UCLA majoring in Physics who plans to minor in Environmental Engineering and Global Studies. She’s very passionate about nutrition and health, as well as environmental issues. She is currently interested in marketing healthy and environmentally friendly food options to the general public, especially to those who are just starting to learn about thee environmental impact of what they eat. Right now Katie is working to collaborate with various chefs who promote eco-friendly recipes.